I sat there staring out the window it was early fall so the sun was setting fast. I could not stop shaking and the drugs they had administered where doing very little to take the edge off. There were two squirrels tumbling through the golden leaves lost completely in the moment. I wanted to be them, i wanted to be anything other then myself. My diagnoses  was not good my disease was fatal. I couldn’t believe i was here again . I couldn’t believe that there was such a simple way back to health yet so difficult to attain! I ignored the questions the nurses insisted on asking choosing to look the other way . The squirrels had the answer I wanted not the nurses. It all started earlier that summer I had stopped by some old friends house I missed them and had not seen them all winter. They were happy to see me and asked how i was doing we exchanged pleasantries but the house was bustling with movement . The young women were packing things in coolers the guys enjoying a few beers while they came up with a plan. It was a hot day in Hamilton a small neighborhood just outside the city. You could buy old houses cheap there ,as the community was hanging on by a thread. Hamilton had attracted working class families , artists, and in this particular case a young hippy by the name of Jere and his father Rick. Jere owned the house and his father lived with him. Along with whatever young attractive free spirited hippy girl that had fallen for him charm that season. The AC was not working very well so everybody’s t-shirts  were soaked. They were planning to flee to woods where shade would be plentiful with a light breeze through the trees to make them forget all about the sweltering city heat for a while. I was just passing through but  quickly chimed in on the perfect wooded retreat spots surrounding Baltimore. I was offered a beer but declined i finally had my health back and the thought of beer at the time seemed pointless. I mentioned a spot and all attention turned to me . A close friend of mine had showed me a secret spot if you would. He had moved to Wyoming the year before and had passed it on before he left. It had a crystal clear swimming spot will a fire pit and multiple trees to string hammocks . I had always been drawn to the woods and felt at peace in them. So as i told them about the spot there adventure began to become mine too. I pushed my motorcycle in the back yard and locked it to the porch ,and without thinking twice i was on my way to the woods. Now i had told myself i would show them the way introduce them to the spot and catch a ride back into town. I know there was a lot of holes in my plan so i doubt i had any intentions to leave in the first place. Now Jere was an old soul people were drawn to him, old man Rick Jere’s father would always say he was Lennon reincarnated as he was born on the day he was shot. They were hippies to the core and with that came everything that hippies do. We got to the head of the trail and Jere pulled out a huge bag of mushrooms . I reached in and grabbed a handful and brought it to mouth this was the true crossroads not the trail head . If i ingested this handful of impairment i would instantly be sick again and everything i had based my health and happiness on surely would be gone. I gulped down the wrong decision and barely chewed before i swallowed. The rest of the summer was a blur filled with hallucinogens,pot,alcohol ,and hard drugs. I stayed in Hamilton and along with the things i mentioned tried to drown myself in bourbon. My health quickly faded along with my happiness. During that period Jere never stopped smiling and Rick was always there swilling warm Captain Morgan stowed in his belt. Jere was the image of who i thought i wanted to be and Old Man Rick was the image of who i would become if i didn’t stop. I was stuck in a world of almost’s and not yets. I had done it again I had chosen my terminal disease over the simple cure of abstinence . The nurses had enough of me choosing the window over the treatment i had professed to need earlier that day . I was back in rehab and this was just the beginning the DT’s were worse then i had ever had. The desire for cocaine and the other drugs i had used as nourishment the months leading up to this paled in comparison to every cell in me shaking for one more drop of whiskey. This was my first day of detox I had two more days here to make sure i would not die from withdrawal ,before i moved next door to start a thirty day program. They set the tray in front of me and told me I had to eat I started with a spoon full of peas. From the tray to my mouth the shakes shook the peas from the spoon I managed to eat just one and quickly gave up and ate with my hands. Who was I ,How did i get here again. 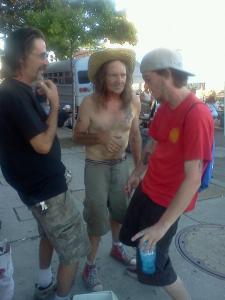 One thought on “Spilt Peas”

It was little Prues 4th Birthday. She’s such a sweet gentle soul. Had a great time @oilsandoddballs. #cappy #granddaughter #4thbirthdayparty

It was little Prues 4th Birthday. She’s such a sweet gentle soul. Had a great time @oilsandoddballs. #cappy #granddaughter #4thbirthdayparty
%d bloggers like this: